3 Methods of Mastery by the Professional Speaker of all time 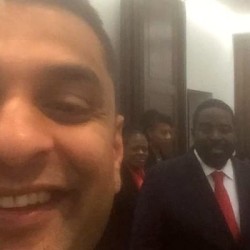 0500 hrs the alarm shrieks out. I leap up. I didn’t even struggle. I wasn’t even tired. I couldn’t get ready fast enough. Full of energy, excitement and determination – I catch the first early morning train from Sheffield to London. Writing my thoughts and questions for the day as the train, ”the Master Cutler” roars towards the capital as if it knows the importance of this day. (Those close to me know that I don’t do early starts unless it involves big rewards!)

I get to the venue, appropriately named THE LIGHT, Euston London. I meet with familiar faces from the Speaking World, friends, students, business people and some of us are escorted through to the VIP room – where energised conversations are taking place, people catching up, laughter, hoping, dreaming, daring to think big…the atmosphere is electric and then that door opens and my speaking hero walks in, humility rolls off every stride, huge authenticity radiates as he smiles, laughs and waves followed by a voice with velvet like quality says hello London. I see everything in slow motion and am overcome by emotion. I rise to my feet, applaud with vigour, the room rises and people cheer out to our guest. The love in the room is overwhelming as it pulsates with gratitude, all of which this man deserves and more so.

Les Brown – possibly one of the greatest speakers of our time – walks in and starts a conversation with the VIP room, he is a man who knows – a man who has inspired millions through not just what he tells you but How Tells it and why he does what he does. Those of you who have not seen Les Brown you must do everything in your power to see him. This event was worth every second and I know that I will be back there. It will not take a genius to work out I am a diehard Les Brown Fan – and early on in my speaking career I sought his help to support me on my journey and remain an admirer of this speaking enigma. I feel indebted to him for every success and want to acknowledge this true giant of the motivational speaking world.

However here I want to share with you some of the reasons why the Les Brown effect works, not just works but reconfigures the very DNA of professional speaking. I will humbly share 3 approaches I witnessed that Les is a master of – so that you too can first understand, then practice and finally begin implementing in your own speaking endeavours.

It may sound obvious. However Les is a master of this art and on Saturday he demonstrated it perfectly. His super relaxed start from the very beginning was evident, so evident that Les from the front row where I was sat – was almost in a meditative state at the start – his choice of words, his reflective tone, his volume, facial expressions, eye contact, smile, every bit of his body language was not just relaxed but super-relaxed, and at absolute ease. His gravitas rating was off the scale as a consequence. This is in sharp contrast with many other speakers who will send signals of being under the influence of ‘fear/adrenaline’ especially in the first 20 seconds.

The reality is Les who is 70 years young – has served his stage time and that level of confidence becomes possible when you have been there done it and bought the theatre hall….However as professional and aspiring speakers we must aim to master the relaxed start and do this by having a pre-speech warm up, a ritual or pre-contact with your audience. Understand the aim is not to be so perfect in our structure just to be perfect in our persona from the very beginning and the rest of the speech will follow.

I would sum up Les’s start like that of a 747 getting ready for take-off. The sheer presence was enough and when the aircraft rolls forward you know something dramatic will be happening very soon. And that definitely did indeed happen!

Yes Les Brown tells stories, but on Saturday he shared how to make a story super effective, whilst doing this he displayed the Les Brown Mastery method. He asked the audience what they observed and rightfully people talked about emotion, they talked about vivid descriptions and when I got my chance I relayed back to Les Brown –‘You weren’t just telling the story you were ‘Inside The Story’.  To which Les’s big warm smile erupts and he acknowledged this as a major point – going on to explain why. (I felt elated by the endorsement – like a child who meets his sports hero) But besides my reaction why is this valid.

When you tell stories it is important to be as vivid as possible but to take that to the next level you can’t just tell the story from an observational perspective but to actually be in the story. When Les described the story of persistence in getting rejected for his first job 7 times from the same boss he told it as if he was reliving it, the voices, the expressions, the body language and it was brilliant- rightfully receiving a standing ovation. Why? Reliving a moment on stage does something amazing – your brain and the brains of your audience’s start to synchronise – a scientific fact. With this people feel your pain and pleasure, they understand and they remember, the level of rapport spikes and with it the level of impact. Les Brown lesson 2: Be Inside the story.

Whilst watching Les get in to his stride it became obvious that he was enjoying telling us his stories. And he was feeding off the enjoyment of his audience. It is important to understand that this is a super advanced level technique and relevant for the professionals who do already enjoy a decent standard of appreciation from their audience. However to take appreciative applause to standing ovation we can’t just drown people with lots of great content. We must involve them emotionally and then demonstrate that we too are being affected by the love the audience are giving to us as speakers. This cycle of emotion was evident on Saturday. When Les started to deliver well known Les Brown phrases that the audience would finish for him – you could physically see Les grow. His gratitude was evident by the fact he stayed over time, kept telling us how much he loved being in London this time round. And as a consequence we as an audience wanted to give back – naturally. We were incentivised to give back and that was the absolute master stoke by the master of masters. Les Brown lesson 3. Love your audience.

Needless to say I did get back to Sheffield at 11:55pm the same day. Was it worth it – hell Yeah “#You gotta be hungreeeee”-Les Brown.

Les is back in 2016 and I strongly suggest you book on if you can!