Why the word ‘Audience’ should be banned

Under Public Speaking Tips | No Comments 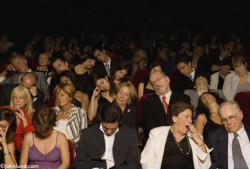 I was at a conference recently when the CEO referred to ‘the audience’ he had spoken to the previous year, he also referred to us again as; “you….the audience”.

His words seemed to grate on me and I suspect on others too but instead of switching off I became really curious.

Why had his words made me cringe? Why did people seem to be losing interest in the message after all the content and delivery was good? What was underpinning this? What are the lessons that we can unpack and implement as Speakers?

Although I do not believe that there was any malaise or wrongful intention on the CEO’s part his unconscious comments did something very destructive. In referring to us as “you…the audience” he had stripped us (the audience) of our individuality whilst putting himself at the very top of an imaginary pyramid from where he appeared to be looking down on us.

The more I observed the more I noticed that he was speaking AT ‘the audience’. Whilst he spoke much sense in what was a well practiced key note, it was clear there was a missing ingredient. Observing the people in the auditorium I could see many were on journeys of self discovery! They had lost focus and clearly felt they were invisible making use of the time to catch up on a day dream or two!

What is wrong with Speaking to an Audience?

Surely every speaker should speak to an audience after all that’s what they are there for? This argument starts to weaken when we truly understand the mindset and the behavior of individuals during the process of communication. In a one to one conversation it would be conventionally rude to ignore, to day dream or simply stare stone faced at someone talking to you. In fact most of us are socially conditioned to listen actively, the nods, the smiles the yes, ah-ha noises etc. However place the same people in a group being “talked AT” you will see the same people exhibiting the very signals we may argue are rude in a one to one conversation.

Why do Speaker’s lose their audience?

Of course there are a multitude of reasons for disengagement and a multitude of professional techniques that you can learn to improve engagement. However one of the paradigms that under pins good communication is the ability to make people feel special, to feel unique.

We live in an individualistic society, every person wants to feel valued, in fact we want the message to resonate with us, make us feel singled out which increases the likelihood of us taking action on what is being said. Furthermore it is the very reason why people undertake one-to-one coaching and are willing to invest a lot more than just attending a seminar. It is therefore the Speakers duty to reach their audience and not the audiences’ responsibility to behave like a good group! It is about making the optimal use of the laws of conversation and social etiquette.

We know from our one to one conversations that people listening to you are ten times more likely to actively engage if you are speaking to them directly rather than losing personal eye contact or forgetting to use their name for example. Equally we enjoy being in the company of people who are present, actively listen and are attentive. It is these conversational laws that need to be exploited if we are to ensure that your audience members are made to feel special and ‘hang’ to your every word.

How should a Speaker treat his “audience”?

Not like an audience! Which seems counter intuitive however I have witnessed many experienced inspirational speakers struggle to motivate audiences because they are speaking ‘over the heads’ – applying an individual message to everyone with zero impact. When I have sat down with the speaker in a post event coaching call it is often the fact that they failed to recognize that the audience was made of many individuals.

Conversely some brand new speakers I work with have been able to zero in on individuals with a basic message because they are talking to individuals rather than the entire group. In fact I have literally seen people wake up, sit up, pay attention and smile in their seats!

What should you do?

As Speakers we need to realize that our audiences are everything – without them we are redundant. Therefore it is about ensuring there is humility and respect which starts from you not the audience. The stage, the applause and even the microphone all falsely inflate our position – the very best speakers will work hard to equalize. They recognize that they have a critical role to entertain, inform and inspire but also to work with individuals who happen to be sat in a collection of individuals who all are the sole focus. Happy Speaking.

Is Your Story Enough?