The Way Out Was Easy – Get The Right Presentation Mindset 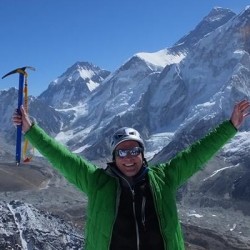 I took the call; it was a call no husband wants to take. The voice on the other end told me my wife had been in a car accident on a duel carriageway near Wakefield.
The car was a total right off… my wife was ok, shaken and bruised but she was ok.

In 15 minutes I should be giving the biggest gig of my life, a presentation for one and a half hours to up to 2000 people in Liverpool’s Echo Conference Centre. Right now I’m in shock, what should I do, pack it all in and drive the 100 miles to be with my wife or should I carry on?

10 minutes left to make up my mind and the truth is I was a bit nervous about doing this gig anyway, everyone would understand if I canceled, the way out was easy.

My wife was ok, shaken and upset but she was with family.

I decided to carry on, but I was hardly in the right mindset to walk on stage to 2000 people with less than 10 minutes to go.

I thought to myself I’ll go to that little balcony I spotted just the other side of that bar. It was perfect, a balcony overlooking the river Mersey. I started to practice my opening lines and pace up and down, project my voice to the huge expanse of water and let my frustrations go. Then after less than a minute a woman came out and asked what I was doing?

Embarrassed having been interrupted full flow by someone who is probably going to be one of my delegates in a few moments.
Sheepishly I said I was just practicing, “for what?” she asked. “I’m just trying to clear my thoughts” I replied.

The woman didn’t move, she stayed there and then others joined us. My little sanctuary was now a public area in high spirits and with group selfie’s going on around me.

Now about 5 minutes to go and I can’t say I was anywhere near in the right mindset to take on the biggest audience of my life.

Only one thing for it

Amongst the chaos around me I looked out across the river, I took a stance like supper woman, hands on hips, feet a little apart head back and closed my eyes and let the heat of the sun warm my face and went deep into my thoughts and I took myself back to a time less that a year ago a time when I attempted to climb a mountain.

Arriving in Katmandu, and meeting the rest of the expedition I wondered if I had created a challenge that was one step too far.
The others were all younger, fitter and far more experienced than me. Mount Lobuche at 6019m (over 20,000ft) was 10 days hiking away.

On arrival to the mountain we set up base camp, the following day we took everything up to high camp.

The morning of the accent we set off at 2am, as we wanted to get to the summit before the clouds came in.

So by the light of the moon and head torches we started our final accent. Its minus 10 degrees and there is this huge rock face to climb. I have to admit standing at the foot of this rock face I was daunted, it was freezing, it was dark and there was only one way to go.

I reached up for my first handgrip.

After 4 hours of rock climbing and further 3 hours snow and ice climbing the air was getting very thin. I reached the summit at over 6000m (20,000) the most exhilarating hour in my whole life, I felt wonderful, absolutely terrific, powerful, happy and high as a kite.

The sun was shining, not a cloud in the sky and as I looked across the valley at Mt Everest, I noticed something, I noticed that for the first time I was not looking up at Everest I was looking across at Everest.

People often ask me how to get over the nerves when preparing for a presentation and I often say to them to think about a positive time in your life, but don’t just think about it, go back and re-live the moment when you ran across the finishing line, when you opened that letter saying you got the job, when you scored that goal.

If you focus on getting over your nerves you are bringing your nerves to the forefront of your mind – when you concentrate on a positive achievement of yours, then that is what you bring to the stage having forgotten about your nerves.

The Public Speaking Academy specialise in getting over the fear of public speaking, and our course are award winning, royalty endorsed. Check out our upcoming courses and jump in to an environment that just might change your life…

Are You Born a Natural Sp...