What makes a great speech?

Under Public Speaking Tips | No Comments 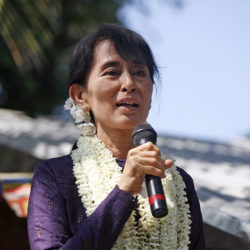 What makes a great speech, what makes an effective speech and how can you connect with the audience.

“Within a system which denies the existence of basic human rights, fear tends to be the order of the day. Fear of imprisonment, fear of torture, fear of death, fear of losing friends, family, property or means of livelihood, fear of poverty, fear of isolation, fear of failure. A most insidious form of fear is that which masquerades as common sense or even wisdom, condemning as foolish, reckless, insignificant or futile the small, daily acts of courage which help to preserve man’s self-respect and inherent human dignity. It is not easy for a people conditioned by fear under the iron rule of the principle that might is right to free themselves from the enervating miasma of fear. Yet even under the most crushing state machinery courage rises up again and again, for fear is not the natural state of civilized man.”
Aung San Suu Kyi, Freedom from Fear

See How Aung San Suu Ki breaks down what could be over looked. She could have just said ‘Fear is the most insidious form which masquerades as common senses’.

But look at how she breaks down the message, so that we can relate to the meaning.

Fear of imprisonment, fear of torture, fear of losing friends and so on. By repeating and expanding the listener can really get into the passion or understanding that is being conveyed.

And look how, even though life is about as difficult as you can get, she gives hope and finishes by letting us know that no matter how crushing the state is ‘courage rises up…’

In summary: Don’t be shy in repeating yourself, make it simple by breaking down the components parts, expanding story, elaborate and paint the picture.

Is Your Story Enough?